Since Mount Everest was confirmed to be the highest peak in the world, mountain climbers from all over the globe dreamed of summiting it. Summiting the highest mountain of the world sounds very daring and something every high-altitude climber’s ultimate wishes to achieve at least once in their lifetime, but there is a dark side of Mt Everest that is often overlooked.

‘Rainbow Valley Everest’ is not exactly a beautiful valley on Mt. Everest as you might have guessed from the name. It is a region on Mt. Everest that is approximately 8000 meters high and stretched with bodies of mountain climbers who failed to complete their expedition safely. Some of these dead bodies have been lying on Mt. Everest for even decades as recovering the bodies is a very expensive and life-threatening job.

The name ‘Rainbow Valley Everest’ has a rainbow in it because of the colorful jackets these bodies are covered with. High-altitude climbers come across these rainbow-colored dead bodies when they summit Everest in the region that is difficult to survive. There are not only dead bodies in the Rainbow Valley Everest, all sorts of garbage and equipment that belonged to once alive climbers also lie on Everest.

The Rainbow valley Everest also gets very steep at some places. When climbers come across bodies on the route, they push them across to make way and the bodies lie on the sides as a reminder of how the smallest mistakes can take away lives. During the ascend on the death zone, the climbers are reminded by the bodies to stay focused and alert at all times.

The bodies on the death zone trail were pushed across the route to make way. This led to the creation of an eventual graveyard for the bodies that lay in the Rainbow valley of Everest.

So, let’s dive into why is the Rainbow valley Everest so dangerous and how people lost lives during the ascent or descent from the valley.

Where Is The Rainbow Valley Everest? 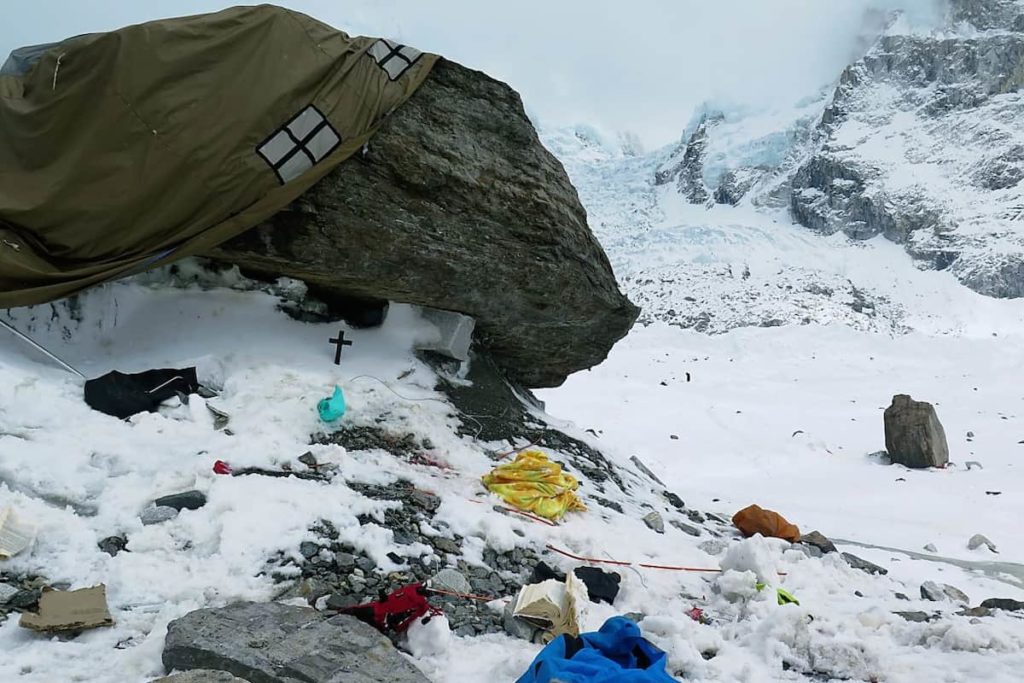 The death zone refers to Mt Everest’s peak that is above 8000m. More than 200 climbers have died in the death zone due to extreme weather, avalanches, and exhaustion from continuous climbing.

The oxygen level in the Rainbow valley Everest is one-third of that on sea level. Breathing in an air that has low oxygen while climbing in harsh weather can exhaust a climber that might lead to climbers making mistakes when they cannot think rationally due to the environment of the death zone.

Therefore, most climbers carry supplementary oxygen tanks with them and use them, especially while in the death zone to avoid altitude sickness and avoid stressing the lungs. The bottleneck of Mt. Everest is an approximately 6 hours steep climb to the summit that is one of the hardest parts of this journey.

The group of climbers begins climbing in a queue as you may have seen in some pictures. In peak seasons when the weather is wildly dangerous, the mountain climbers have to stick through when climbing to the peak for additional hours.

Why Do Bodies Keep Piling Up In The Rainbow Valley Everest?

Most death casualties that occur on Mt Everest happen in the death zone or the Rainbow valley Everest. The level of oxygen is very scarce and a short oxygen supply is one of the most common reasons for health problems and death among climbers. Additionally, the ascend and descend to the summit is very narrow.

One mistake that leads to a fall can kill a climber on the spot. With no medical team and days of journey to the base camp, mountaineers seldom survive with severe injuries and die within the Rainbow valley Everest region. Anyone who dies on Everest is preserved on Everest forever so the bodies keep piling up unless removed.

Dead bodies on Everest don’t lie very beautifully and proudly either, the extreme weather drifts them, and they are pushed and walked upon by climbers. A recent climber expressed how he felt about a body on Everest as ‘a man who was wrapped like a mummy’. Since the expedition to Mt. Everest started in 1922, more than 200 climbers have died in the death zone.

Why Are Dead Bodies Never Removed? 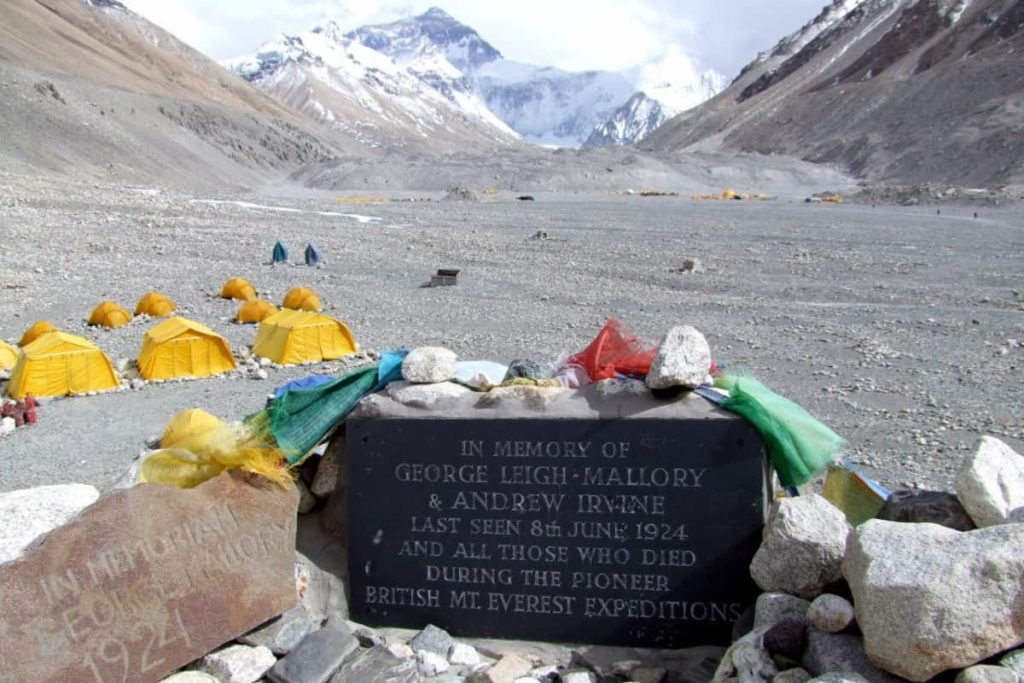 Dead bodies are never removed because climbing Everest alone is a pretty difficult task. Carrying a body all the way down is extremely risky and might also result in the death of the rescuer. None of the climbers dare to do that for a body however, they may slide or move a body away from a particular spot, no one carries the body down for free. To get a body rescued from Everest, people spend 70,000 to 200,000 USD where a group of rescuers search for the body and carry it down. Because helicopters cannot go to the death zone as their highest limit is reached at 8000m, the Sherpas (local guides) or the rescue team have to climb and search for the bodies.

Most people who have insurance are searched for days when they get lost on Mt. Everest and don’t return. Some insurance policies also cover retrieving the body along with rescue in case a mountain climber did not return as arranged. In that case, a helicopter and expert team dispatch and start the search operation.

Because it is highly expensive to retrieve a body, only the bodies of those people who have insurance or rich family members are removed from Everest. In 2019, the Indian government paid approximately $200,000 to recover the body of an expert Indian climber, Dipankar Ghosh, along with 3 other climbers. So, there must be someone willing to pay for the rescue of a body to be removed from Mt. Everest.

Why People Die In The Rainbow Valley Everest? 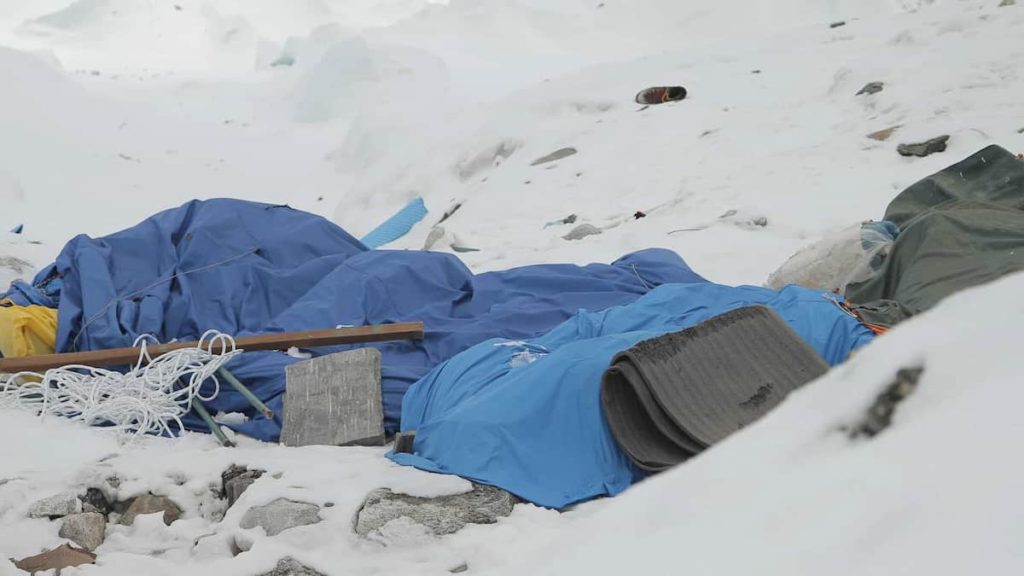 Mount Everest’s death zone or Rainbow Valley Everest is a tough place. The oxygen is thin, the trek and climbing the bottleneck is tiring, the weather conditions are harsh with blizzards, and strong wind. All of these factors challenge the ability of a mountain climber to stay rational, active, and healthy. The majority of deaths that occurred in Everest’s Rainbow valley Everest occurred due to avalanches that troubled the climbers. The other factors that lead to deaths were acute mountain disease, fall, and exhaustion. However, over the years, the death rate has decreased. The current death rate of deaths is 1% only because of the proper training of these climbers.

The Nepalese government has also set some strict rules in deciding who is allowed to climb Everest, which shortlists only the expert high-altitude climbers. Since 1924, when the expedition to Mt. Everest first began, approximately 5000 climbers have summited the mountain and 305 died in the process until 2021.

One mountain climber explained how it feels to be above 8000m in the air and what is ‘summit fever’ exactly. Summit fever takes away the climber’s ability to make a rational decision. Because of exhaustion and the weather, the climbers find themselves in tough spots on whether or not to continue the journey. Poor decisions can end in a mountain climber struggling to go ahead when they are drained of energy it becomes nearly impossible for them to be able to come back.

It is also very important to travel with a group or a Sherpa to make sure that you are with experts. The mountains, temperature, height, and white mountains that look so beautiful in photos can start to haunt you if you get lost, catch mountain sickness, or get minor injuries.

Some stories of people who die on Everest are famous among climbers as they are precautionary tales that warn them. These stories were told at the base camp and are also well-known now to a wider audience as they were shared by climbers on the internet.

The fellow climbers are always telling other climbers legendary stories of people who climbed the mountain with hardships as a way to impart knowledge and warn about the dangers that lie ahead when they leave the base camps and start ascending. The three most famous base camp stories are Sleeping Beauty Everest, Green Boots, and Hannelore Schmatz. 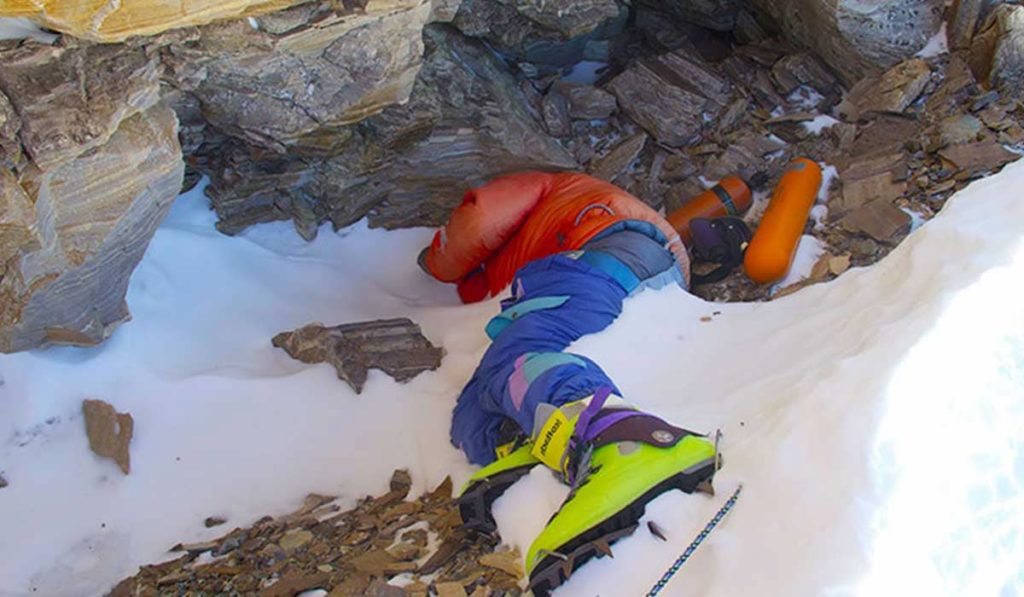 Green boots is a famous base camp story about a body on Everest that also serves as a landmark that guides the climbers and has also reached cult status. It is believed that the body is of an Indian climber, Tsewang Paljor, who went missing in 1996 along with a team whose bodies were never spotted. The Green Boots body lies in a small cave near the summit with green boots visible from far away, hence the name Green Boots. 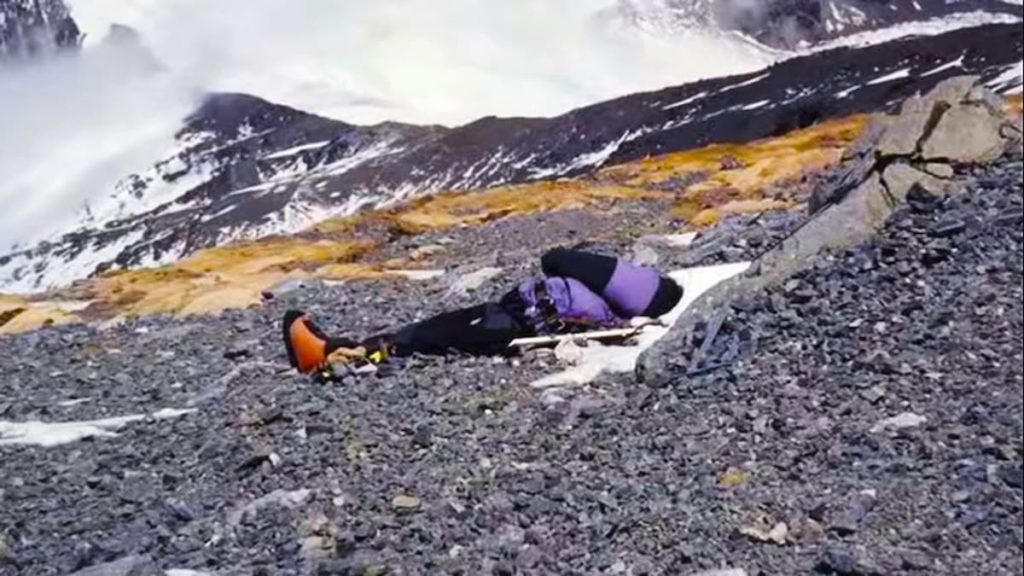 Francys Arsentiev went on the Everest expedition with her husband in 1998. The couple wanted to reach the summit without supplemental oxygen. They did succeed in reaching the summit but on their way down, something horrible occurred that led to injuring Francys Arsentiev. Her husband reached the camp and waited for Francys, who was lost. After a few hours of waiting, he went on to look for her. Sadly, Sergei Arsentiev fell and died looking for her.

Francys Arsentiev was found by other climbers during the climb who stated she was suffering from frostbite, had some injuries, and struggling to breathe in thin oxygen. She stayed alive for 3 days and passed away lying in the same spot. Later, a mountain climber described her body as a ‘sleeping beauty’ lying on Everest. The story became famous and was told as a precautionary tale that summiting Everest without supplemental oxygen is indeed very dangerous.

A German Climber Hannelore Schmatz became the first woman to die on Mt Everest. In 1979, Hannelore Schmatz, along with a group of six other climbers and five Sherpas went on to summit Everest. Although they made their way to the top, they got stuck during the descent. Others reached the base camp successfully but Hannelore and American climber Ray Genet could not make it back to the base camp.

Almost 8000m high in the air, Hannelore Schmatz’s body remained preserved in the ice and was seen by the climbers who passed by. Her eyes remained open and her hair flying in the air. Strong winds drifted her away but her body still lies in the Rainbow Valley Everest. In 1984, a policeman Yogendra Bahadur Thapa with his team, led an expedition to recover her body, unfortunately, the Nepalese police expedition failed when Yogendra Bahadur Thapa fell to his death.

The story is famous and told as a precautionary tale that exhaustion can do the worst to you on Everest. It takes away your ability to make rational decisions to a point where you might fall and die becoming another body in the Rainbow Valley Everest.

How Long Does It Take To Climb Mount Everest? 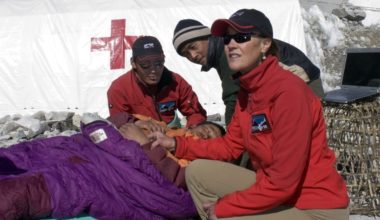 Read More
25th April 2016  “At 1156 today, a minute’s silence was held at Everest ER and other climbing team…
EEverest ER 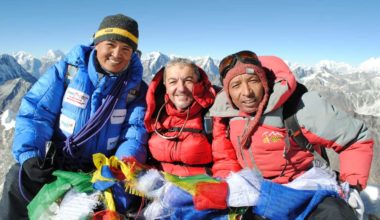