Cold injury manifests itself in the form of a general effect of low ambient temperature on the entire human body (hypothermia) or in the form of local damage to the body (frostbite).

The main manifestations of hypothermia (hypothermia), & first aid for frostbite Hypothermia is a disorder of body functions as a result of a decrease in body temperature under the influence of cold. As a rule, it develops against the background of violations of thermoregulation caused by prolonged exposure to the cold in wet clothes and shoes or in clothes that do not correspond to the temperature regime. Also, hypothermia can be facilitated by trauma, physical overwork, starvation, alcohol or drug intoxication, childhood or old age.

Frostbite is local tissue damage caused by exposure to low temperatures. Signs of frostbite – loss of skin sensitivity, the appearance of white, painless areas on it. Most often, frostbite develops in open areas of the skin (ears, nose, cheeks, hands) or limbs with impaired blood circulation (for example, toes in tight, uninsulated, wet shoes).

Signs of hypothermia in the victim

There are complaints of feeling cold, trembling, chills (in the initial stage of hypothermia). In the future, lethargy appears, the will to save is lost, a decrease in pulse and respiration appears. With continued hypothermia, consciousness is lost, the pulse slows down to 30-40 per minute, and the number of breaths is up to 3-6 times per minute. Hypothermia can be combined with frostbite, which should be taken into account when providing first aid.

First aid for hypothermia with frostbite

You should change the victim’s clothes to warm and dry, wrap him with improvised means (for example, a blanket), move him to a warmer room, give a warm drink (if he is conscious). Indoors, warming can be carried out in the form of warm air baths (direct a stream of warm air to the victim).

The presence of a rescue isothermal blanket

If there is a rescue isothermal blanket (included in the first aid kit for workers), it is necessary to wrap the victim with the silver side inside, leaving the face free.

With severe hypothermia, it is necessary to control the condition, be ready to conduct cardiopulmonary resuscitation in the amount of pressure with the hands on the sternum of the victim and breaths of artificial respiration. With severe frostbite, a “wooden sound” may appear when tapping a finger on an injured limb, impossibility or difficulty in moving in the joints. Some time after warming, pain, swelling, redness with a bluish tint, blisters appear on the affected limb.

Degrees and signs of frostbite

Depending on the duration and intensity of aggressive exposure, as well as the nature of tissue damage, 4 degrees of frostbite are distinguished.

The initial manifestations are similar in all cases (which does not allow to reliably determine the degree of frostbite in the first hours after the injury):

After the appearance of the first general symptoms, symptoms specific to each degree of frostbite develop.

It is characterized by mild soreness of the skin, after warming, intense redness and slight swelling are noted, peeling of the affected areas is possible without the development of necrosis. After 5-7 days, skin manifestations completely disappear.

Within 24-48 hours, blisters of various sizes appear on the damaged areas of the skin, filled with transparent (serous) contents. Pain is intense, characterized by itching, burning of injured skin. With proper treatment, the skin condition is restored after 7-14 days, there are no cicatricial deformities at the site of the lesion.

There is a necrosis of the damaged skin, which leads to loss of sensitivity and the formation of massive painful blisters with a purple-bluish base filled with bloody contents after warming. Subsequently, the blisters become necrotic and slough off with the formation of scars and granulations. Scarring can last up to a month, and rejection of the nail plates also occurs, sometimes irreversible. It is manifested by total necrosis of not only the skin, but also the underlying soft tissues (up to the bones and joints). Injured areas of the skin are cyanotic, after warming a sharply increasing edema is formed, there are no blisters, the sensitivity of the skin after warming is not restored, gangrene subsequently develops. The affected areas are subject to amputation.

With a long stay at low temperatures, general hypothermia is possible, as evidenced by a decrease in body temperature to 34 ºС and lower (up to 29-30 ºС in severe cases). Depending on the severity, the condition is manifested by inhibition of the activity of the respiratory, cardiovascular and nervous systems of varying intensity, up to coma and death.

Should You Buy a Portable Toilet for Camping?

A Guide to Watching TV Shows Offline when Camping 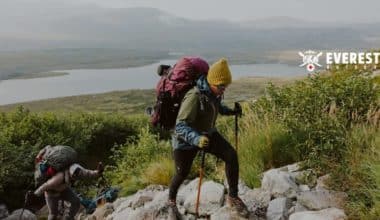 Read More
Table of Contents Hide Let’s Take A Closer Look At The Ways Of Watching The NRL1. Use A…