MT Everest Temperature- How Cold Is It Actually?

Since the beginning of expeditions to summit MT Everest in 1921, the most famous range of mountains has always held the fascination of the world. Many have taken up the challenge of the extremely dangerous terrain and harsh climate that the mountain range offers to etch their name in history.

MT Everest was named after Sir George Everest, a British citizen on duty as the Surveyor General of India. The name for MT Everest in Tibet is Chomolungma which means Holy Mother and the Nepalese call it Sagarmatha which means Goddess of the skies. To call MT Everest one of the most difficult places to be would be an understatement. The highest out of the 14 peaks that make up the Himalayas, MT Everest has always been considered the most difficult and the most dangerous peak to conquer. However, that hasn’t stopped people from attempting to climb the mountain range. Though many return without success, a few manage to get into the annals of history. The best way to describe MT Everest is to call it a three-sided pyramid. It’s basically folds and folds of rocks formed on top of each other for ages, covered with ice and snow which gives it the insurmountable edge.

One would require numerous equipment to climb MT Everest. Other than the regular mountaineering equipment including rappelling devices such as harnesses, descenders and carabiners, ropes, mountain boots, ice-sacks, and crampons, the climbers would need headgear, goggles among other equipment.

MT Everest temperature demands the use of Special clothing such as a down jacket, layers that are thermal and windproof, thermal socks, mitten gloves, sleeping bags, and oxygen masks.

The cost for all the clothing equipment required to safely climb MT Everest can be astronomical depending on the quality of material purchased. However, it is a small price to pay for being well protected against the whimsical climate on MT Everest.

As someone attempting to climb Mt. Everest, one would require a minimum of five oxygen cylinders of 4.5-kg. It would also be helpful if one has a couple of spare cylinders. This calculation is based on the fact that each oxygen cylinder lasts for 7-8 hours at a normal usage rate and will be required by climbers making their way up to the summit.

There are two routes that most MT Everest climbers choose to attain the summit. To describe it in simple terms, one can choose to climb MT Everest either from the Nepal side or the Tibetan side. The Nepal side is called the Southeast Ridge and was mapped by Tenzing Norgay and Edmund Hilary in their historic climb in 1953.

The second route is the Northeast Ridge which also has its own share of perilous journeys to attain the top. It takes months of preparation and training followed by a disciplined couple of months to complete the trek to the summit.

The summit itself is just a small dome-like structure covered with snow which in comparison will be just as big as a dining room table. It is small enough to fit a couple of people and hence, climbers end up waiting at the spot called the Death Zone awaiting their chance to summit.

The Death zone is also officially designated as the place where maximum deaths take place on MT Everest. However, studies also highlighted that the deaths happen during the descent more than the ascent of climbers.

MT Everest temperature is difficult to predict and difficult to manage. That is why a pre-knowledge of what awaits you on MT Everest becomes important.

Based on weather conditions the most favorable designated season to climb MT Everest is often the month of May. The climbers get close to a dozen days to complete their climb and return to base camps.

However, the whole process has to be systematically carried out so as to not fall prey to the vagaries of MT Everest temperature. Situated at approximately a whopping 29000 feet, MT Everest doesn’t offer the luxury of even taking one’s own breath.

Oxygen levels are quite low at such a high altitude and climbers have to make do with oxygen cylinders carried from the base camp to the peak. The climb is also hazardous because the high altitude and dropping MT Everest temperature create the threat of frostbite. The speed of wind force on Everest on average is 285 km/h. The reason for this is the height of the mountain range that it touches an altitude where the atmospheric winds continuously plummet the face of MT Everest. Add both the general MT Everest temperature and the cooling winds continuously blowing across, and you have one of the coldest places on Earth ever.

Depending on the time of the year one asks, MT Everest temperature differs drastically. And this erratic difference can be seen on the Death Zone right beneath the summit.

Trekking up to MT Everest will present one with some of the harshest and most treacherous climates ever experienced. One has to prepare oneself not only to withstand these extreme temperatures but also to survive the long arduous journey.

One has to have the utmost levels of fitness and above-average stamina to even qualify for a climb up MT Everest. The Nepal Tourism Board clears the applications from climbers. They scrutinize whether a climber is accustomed to the heights with prior Himalayan climbs under their belt.

This is nothing but the difference in actual cold temperature and the felt chill reported by the climbers. Climbers report feeling excessively colder than the actual temperature at times. This is owing to the lack of metabolism activities high up in the mountain ranges. The body doesn’t burn as many calories as it regularly does at a higher altitude. However, one can classify the various seasons on MT Everest and the resultant MT Everest temperature as follows:

The most frequent and consistent season is winter, which is often very cold and receives a lot of snow. Winter continues from the month of November to February on MT Everest.

Then there is the spring season which is sunny but cold and there is a smattering of snow. This period is between March till June when the monsoons arrive. The storm is a usual fixture at the MT Everest base camp.

The monsoon on MT Everest is usually between June and September. Though it can get cloudy and really cold towards the top, at the basecamp it usually is wet as well as warm owing to the sun.

Forecasting the weather is of paramount importance for the safety of the climbers. This has been carried out since the year 2006 by the weather station at Lobuche called the Pyramid Station. The weather station offers accurate and timely updates on MT Everest temperature and expectant weather patterns.

In conclusion, climbing MT Everest is an achievement that may not be as difficult to achieve as going to the Moon, yet it is quite challenging. With the right information and training, one can conquer both MT Everest and MT Everest temperature. 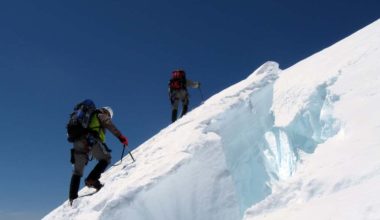 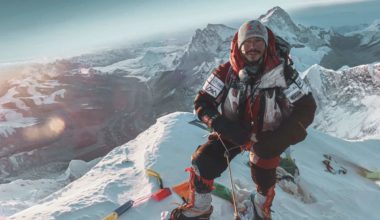