What Mountain Range Is Mount Everest In?

You’re here because you’re probably wondering “what mountain range is Mount Everest in”? In this article, we will find out just that!

Everyone is aware of Everest’s magnificence, but “what mountain range is Mount Everest in?” is the real question to ask. Mount Everest, known for its astounding height, is a top destination for every adventure fanatic on the planet. Reaching the mountain crest’s top has now become a source of pride. Many people are still unaware of where this magnificent mountain scenery is located. Those who aspire to hike to the summit of Everest or climb Everest are bothered by the mountain’s location.

We will shed light on the actual location of Everest in this article along with answering the most frequently asked question by climbers, “what mountain range is Mount Everest in?”. We hope that this article will provide you with a clearer understanding of the location where Mount Everest is located, as well as other useful facts.

What Mountain Range Is Mount Everest In? The Asian Himalayan Range, also known as the Higher Himalayas or Great Himalayan Range, is made up of most of the highest Himalayan peaks that separate the Indian subcontinent’s lowlands from the Tibetan Plateau. Nepal, Bhutan, China, Bhutan, Pakistan, Afghanistan, and India make up the Himalayan range, which runs southwest across six nations.

Mount Everest, the world’s highest mountain, towers over the Nepal-China border. In 2005, the China National Surveying and Mapping Administration conducted a study that pinpointed the precise location of Everest at 27°59′ North latitude and 86°55′ East longitude.

In Nepal, “What Mountain Range Is Mount Everest In”?

The Height Of Mount Everest

Mount Everest, the world’s largest and tallest peak, rises to a height of 8848 meters (29,029 feet) above sea level. Everest’s altitude was first formally recognized by Nepal and China in 1955, and later confirmed by China in a 1975 survey. However, there are several disagreements about Mount Everest’s true height, just like the question of “what mountain range is Mount Everest in?”

As technology has advanced, so have equipment and approaches that have been employed to estimate the actual height of Everest between the 18th and 21st centuries. All of the assessments came to various conclusions on the true height of Everest. The tectonic movement is one of the key reasons for the varied survey outcomes. The mountains grow very little every year as a result of the phenomenon. Indigenous peoples have long lived in the valleys of the Himalayan highlands. The Sherpa people are the most well-known among these. Although the term “sherpa” is commonly used for a mountain guide, it originally referred to an ethnic community. The Sherpas have extensive mountain climbing skills that they may share with other hikers. Without the Sherpas’ logistical assistance and expertise, most Everest hikes would be unachievable. Their lifestyle is not just about assisting climbers and guiding them but also about living in the harsh conditions of the mountainous range by farming and trading.

The ninth-century “lotus-born” Buddhist saint, Padmasambhava, identified the southern part of Mount Everest among several other “secret valleys” of the sanctuary. The Rongbuk Monastery, at the foot of Everest’s north slope, has been termed the “holy threshold to Mount Everest, with the most stunning vistas on the globe.” Rongbuk Monastery is a popular holy place for Sherpas surviving on the Everest slopes in Nepal’s Khumbu region, accessible via Nangpa La after a few days of travel across the Himalayas.

A Tibetan Buddhist “Goddess of Inexhaustible Giving,” Miyolangsangma, is said to have resided at the summit of Mount Everest. Mount Everest is also gifted with spiritual energy, according to the Sherpas, and it should be revered. Tectonic action forced the Himalayan mountains upward as the Indian-Australian Plate drifted northward out from the south and was submerged under the Eurasian Plate after the two plates collided between 40 and 50 million years ago. The Great Himalayas came into focus during the Pleistocene Epoch, some 25 to 30 million years ago, when the Himalayas began to rise, about 2,600,000 to 11,700 years ago. This gives the obvious answer to the question of mountaineers: “What mountain range is Mount Everest in?”

Everest is made up of many layers of granite that have been bent and twisted on themselves. Metamorphic schists and gneisses make up the lowest altitudes of the mountain, which are capped by igneous granite. Sedimentary rocks from marine sources can be found higher up. The Yellow Band, a limestone structure visible immediately just under the summit pyramid, is noteworthy.

Everest has a three-sided pyramid design. Faces are the three normally flat surfaces that make up the sides, while ridges are the lines that connect two faces. The Great and Hornbein couloirs and the North Col at the start of the North Ridge are prominent features on this side of the mountain. The West Ridge and the Southeast Ridge form the Southwest Face, which climbs above Nepal. Important features in this section incorporate South Col (at the start of the Southeast Ridge) and the Khumbu Icefall, the latter a tangle of enormous slabs of ice that has historically been a frightening task for climbers.

Other Names For Mount Everest

Just like the several opinions on “what mountain range is Mount Everest in”, Everest also has had several different names over the years. In Nepal, the world’s highest peak, Everest, is known as “Sagarmatha.” The precise meaning of Sagarmatha is “Sagar,” which means “sky,” and “Matha,” which means “forehead.”

Everest is known in Tibetan as “Qomolangma,” which translates to “Holy Mother.” In the 1721 Kangxi Atlas, the title was first documented with a Chinese translation. Chomolungma and Jo-mo-glang-ma are two Romanized names for it.

The third pole was the moniker granted to the peak before it was given the name Everest. The official title of this summit crest is “Everest,” which was bestowed by land surveyor general “Sir George Everest.” He was the very first human to pinpoint Everest’s exact location.

The Tibetan Chomolungma, also known as Mount Everest or Nepali Sagarmatha, is a mountain on the Himalayan crest in southern Asia. With a height of 29,035 feet (8,850 meters), it is the highest location on Earth, located on the border between Nepal and China’s Tibet Independent State. Climbing Mount Everest seems to have become a fashionable mountaineering adventure, and “what mountain range is Mount Everest in” is the most frequently asked question by climbers. It is, however, a risky venture. Hiking Everest requires a lot of previous climbing expertise, as well as a health certificate, tools, and a professional Nepalese guide. Avalanches are dangerous because of the snow and ice on the peak, and there is only a brief mountaineering period due to inclement weather.

The altitude, though, may pose the greatest threat. The majority of climbers are unaccustomed to the cruising altitude and oxygen deprivation; thus, they depend on bottled oxygen that they bring with them. That’s why the area of Everest over 8,000 meters is known as the “death zone.” Climbers who stay in this area for an extended period may get altitude sickness and brain inflammation.

Edmund Hillary (a New Zealand mountaineer) and his Sherpa guide, Tenzing Norgay, first ascended the summit in 1953 and still hold the record. Both agreed that it was a collaborative effort by the entire expedition at the time, but Tenzing claimed some years later that Hillary had been the first to set foot on the summit. Before leaving, they stopped at the summit to snap photos and bury a few sweets and a little crucifix in the snow.

In their Great Trigonometrical Survey of the Indian Subcontinent, British researchers noted that Everest was the world’s highest peak.

The climbing trend on Mount Everest has become contentious, just like asking what mountain range is Mount Everest in. As the climb’s prominence has grown, more traffic jams have developed as climbers spend lots of time in the danger zone, standing in line for their shot at winning the summit. Since the number of people on the mountaintop has grown, so has the amount of pollution at the summit, as climbers frequently throw objectionable items all over the mountain.

Climbers have also victimized the Sherpa people, and their customary lifestyle has been altered by Western climbers. Sherpa guides have among of the greatest death rates of any profession, despite receiving very low remuneration. Worst of all, many hikers have died along the way, and their corpses are impossible to recover.

Tectonic plates retain their geologic march, and Everest will keep following their lead, even as weathering and force keep the massive mountains in check. We hope this information aids you in answering the question, “what mountain range is Mount Everest in”.

Learn More About Everest By Getting A PhD Program

9 Reasons Why Traveling is Important for your life 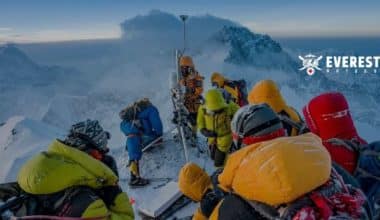 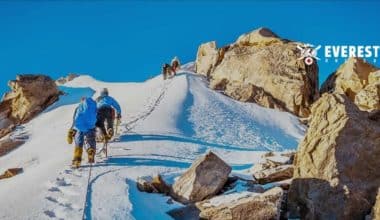 Read More
Table of Contents Hide Where Is The Rainbow Valley Everest?Why Do Bodies Keep Piling Up In The Rainbow…